Vox published an interesting and informative article on the consequences of different Medicaid Expansion programs. “This provides us a unique opportunity to assess the consequences of these different policies, and new research published in Health Affairs this week is maybe the most detailed portrait yet of what happens under these various approaches.”

The Harvard researchers, led by Benjamin Sommers, surveyed people who would be eligible for Medicaid expansion in three states: Ohio, Indiana, and Kansas.

This chart summarizes their findings nicely. 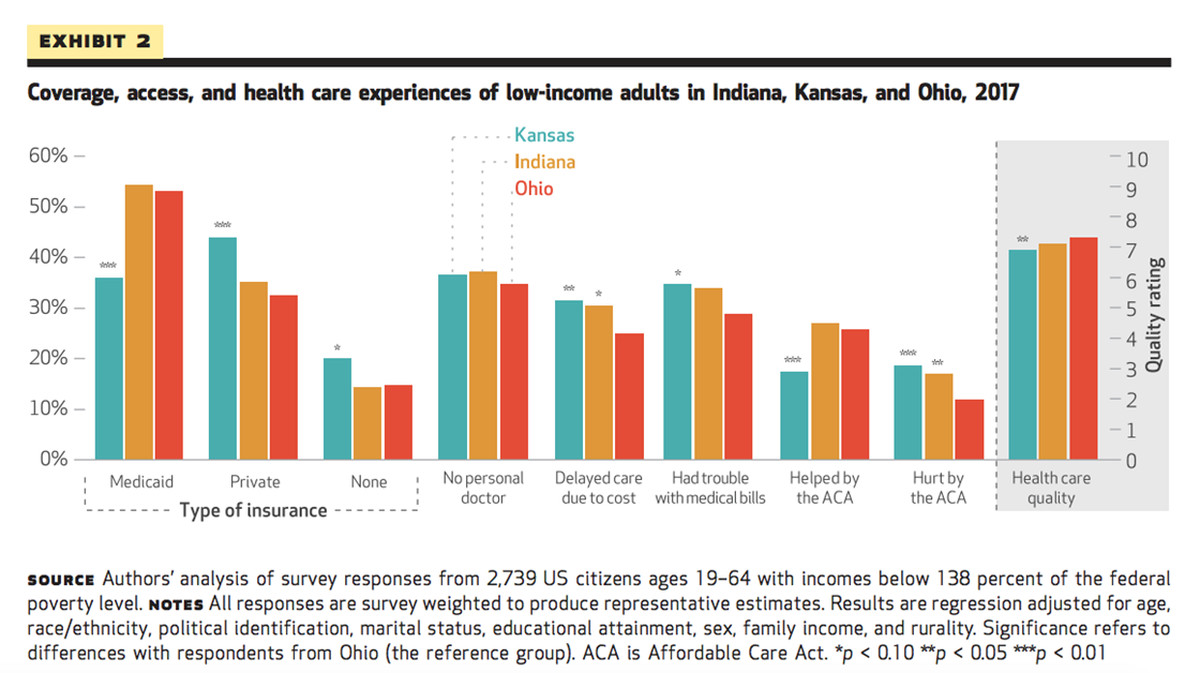 Ohio and Indiana had higher levels of Medicaid coverage and lower uninsured rates for the expansion population than Kansas did.

In Indiana, with its cost-sharing requirements and lock-out provision, the Medicaid expansion population was substantially more likely to delay care because of its cost or to have trouble paying their medical bills compared to the same population in Ohio, which did not ask expansion enrollees to pay much out of pocket.

The unavoidable suggestion is, as the researchers wrote, that “Indiana’s waiver program led to less affordable care than Ohio’s traditional expansion of Medicaid did.”

The Harvard researchers asked a few more detailed of their Indiana respondents. They found that four in 10 Medicaid expansion eligible people had never heard of the health saving accounts they were supposed to pay money into in order to receive full coverage (including vision and dental and more generous prescription drug benefits), and 25 percent said they knew about those accounts but still didn’t contribute money.

Among the people who knew about the Medicaid health savings accounts but who weren’t making payments:

Among the uninsured in Indiana who were not enrolled in the Medicaid expansion program:

“Taking into account the substantial confusion about Indiana’s program and its cost-sharing requirements, it is perhaps not surprising that difficulties affording care were higher in Indiana than in Ohio, which implemented a traditional Medicaid expansion with minimal cost sharing,” the authors wrote.